Celebrity Engagement Proposal In The News And Social Media

Actress Hilary Duff earned almost two million likes after revealing her stunning cushion cut diamond engagement ring on Instagram earlier this month. The 31 year old star of the TV Land series Younger had just accepted a marriage proposal from singer-songwriter Matthew Koma and decided to broadcast the big news with a pair of sweet snaps for her 12 million followers.

Punctuating an Instagram caption with a red heart emoji, Duff gushed, "He asked me to be his wife." Duff's new fiancé shared the same images on his Instagram page and added the caption, "I asked my best friend to marry me... @hilaryduff."

Lacking an extreme close-up of the ring, jewelry experts interviewed by Town and Country, Pop Sugar, Bustle and Business Insider were only able to offer their best guesses about the diamond's shape, size, quality and value.

The general consensus is that the diamond is an elongated cushion cut — the popular pillow shape with rounded corners. Size estimates ranged from 3 to 4 carats. The clarity is assumed to be VS1 or higher with a G color grading. The minimalist white gold or platinum setting sports a split shank, and all these characteristics combine to put the ring's value somewhere in the range of $40,000 to $100,000.

A cavalcade of young actresses were quick to congratulate their colleague on Instagram.

Glee actress Lea Michele wrote, "So happy for you babe!!! 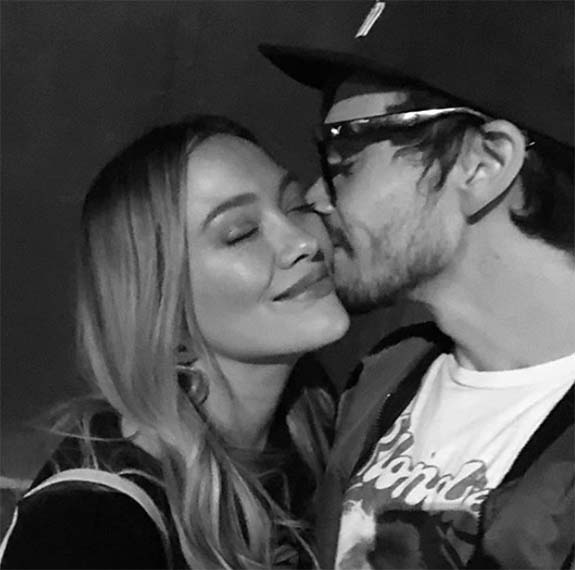 Although it's unclear when they started dating, Duff and Koma made their first public appearance on the red carpet together in January of 2017. E! News reported that they broke up in March 2017 and reunited shortly thereafter.

Duff currently portrays Kelsey Peters on Younger, the hit series that's about to return for its sixth season. Koma, 31, is a member of the band Winnetka Bowling League.

In October 2018, Duff and Koma welcomed their first child together, Banks Violet Blair. The couple has yet to set a wedding date.