Modern Family star Sarah Hyland took to Instagram earlier this month to post a series of photos affirming her engagement to Bachelor in Paradise personality Wells Adams. Hyland's eye-catching oval-cut diamond engagement ring is front-and-center in a number of the shots taken during the couple's romantic beach vacation. 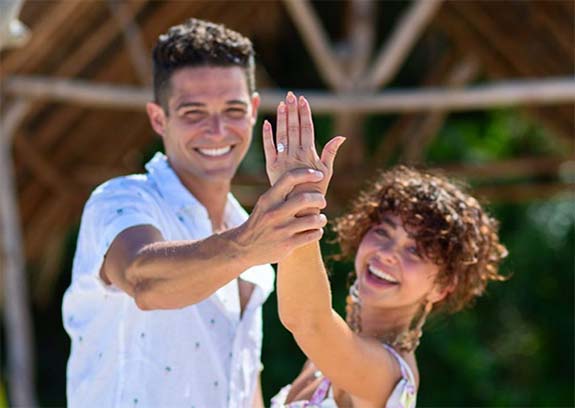 Celebrity and style websites are reporting that the oval-cut stone weighs somewhere in the neighborhood of 5 to 8 carats, with a retail value of $80,000 to $200,000, depending on its exact weight and its color, cut and clarity.  These are of course know as the 4 Cs.

Despite the numerous pictures of the diamond ring that were posted; none really reveal what the engagement ring truly looks like.  Without the benefit of a detailed closeup shot of the ring, jewelry industry insiders were hard pressed to describe the setting. One expert called it a delicate gold solitaire setting, while another said it might be a diamond accented setting. The white metal is likely platinum or 18 karat white gold.

The 28-year-old actress, who has played Haley Dunphy on ABC's Modern Family since 2009, was head-over-heels excited to report the change in her relationship status. She captioned her Instagram engagement photos with the phrase: "That can't eat, can't sleep, reach for the stars, over the fence, world series kind of stuff."

On his Instagram, the 35-year-old DJ posted a behind-the-scenes video of the proposal, along with this caption: "I'll be Johnny, you be June. But forever."

Hyland was quick to comment, "I love you to Pluto and back FIANCÉ. When we get married will I automatically acquire your talent for making everyone cry with a homemade video?"

Hyland and Adams first connected a few years ago when the reality star sent the actress a direct message on Instagram. She told late-night talk show host Jimmy Kimmel that the message read: “The next time you’re in L.A., I’m taking you out for drinks and tacos.”

That friendship blossomed into true love during a traumatic time for the actress in 2017. She was suffering from health-related issues and was undergoing a second kidney transplant.

“He’s seen me at my worst. I think that’s why I feel the most beautiful in his eyes, because he still finds me beautiful after seeing all that,” she told Self.